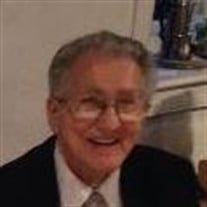 Albert J. Formanowski, 85, passed away on Thursday, January 5, 2017 at home with his loving family by his side. He was born in West Hazleton, Pennsylvania the son of the late John and Josephine Formanowski. Mr. Formanowski was a resident of Manville, NJ for the past 58 years. He served his Country Honorably in the United States Army during the Korean War. Mr. Formanowski worked for the Ethicon Corporation in Bridgewater, NJ for 40 years before retiring in 1996. He was a loving husband, father and grandfather who cherished spending time with his family. Mr. Formanowski was a gentle, loving and warm man. He was an avid woodworker who created many beautiful and artistic pieces over the years. Mr. Formanowski enjoyed traveling and had been to all of the 48 Continental United States. He also enjoyed hunting, fishing, camping, swimming and ice skating. Mr. Formanowski was a member of Christ the King Roman Catholic Church (Christ the Redeemer Parish) in Manville, NJ. He was predeceased by his four brothers Walter Formanowski, Stanley Formanowski, Alexander Formanowski and Edward Formanowski and by his sister Caroline Dombroski. He is survived by his wife of 60 years Mary Formanowski of Manville, NJ, his 2 sons James Formanowski and his wife Casin of Three Bridges, NJ and Robert Formanowski and his wife Denise of Manville, NJ and by his 2 daughters Kathleen Formanowski of Evergreen, Colorado and Eileen Barto and her husband Roy of Washington, NJ. He is also survived by his 8 grandchildren Jessica, Colleen, Corinne, Audriana, Kyle, Aaron, Brielle and Nicole. The viewing will be on Sunday, January 8, 2017 from 3 to 6 PM at the Ketusky Funeral Home, 1310 Brooks Blvd., Manville, NJ. The Funeral will be on Monday, January 9, 2017 8:00 AM from the Ketusky Funeral Home followed by a 9:00 AM Mass at Christ the King Roman Catholic Church in Manville, NJ. Burial will follow at Sacred Heart Cemetery in Hillsborough, NJ. For additional information please visit our website at www.ketusky.com.

Albert J. Formanowski, 85, passed away on Thursday, January 5, 2017 at home with his loving family by his side. He was born in West Hazleton, Pennsylvania the son of the late John and Josephine Formanowski. Mr. Formanowski was a resident of... View Obituary & Service Information

The family of Albert J. Formanowski created this Life Tributes page to make it easy to share your memories.

Send flowers to the Formanowski family.