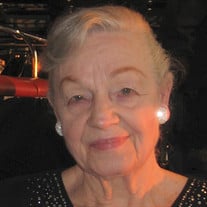 It is with deep sadness that the family of Alexandria Morawsky (nee Gnyp) announces her passing on February 21, 2020 at the age of 83. Alexandria, beloved mother, grandmother and aunt was welcomed into the arms of Our Lord after a prolonged illness. She passed away at Bridgeway Care Center in Hillsborough, New Jersey which was her home for several years. Alexandria was born in Ukraine in 1936. Following World War II, her family immigrated to America in 1947 and settled in Brooklyn, New York. She met her husband Teofil in New York City where they married. The couple moved to Passaic, New Jersey in 1957 and stayed in the Passaic/Clifton area for 40 years, raising three daughters. During that time, the family spent wonderful summers in the Catskills, in Ellenville, New York, in their summer home surrounded by extended family and friends. Alexandria was a parishioner of St. Nicholas Ukrainian Catholic Church in Passaic and an active member of the Ukrainian community. She worked in The Garfield Bakery while raising her children before becoming the receptionist at Fabrite Corporation in Woodridge, New Jersey where she maintained the position for 20 years. In 1998, concurrent with the death of her beloved husband Teofil (who, on a bittersweet note, died on their 42nd wedding anniversary), Alexandria moved to Belle Mead, New Jersey where she became a member of St. Michael the Archangel Ukrainian Catholic Church and integrated into the local community. She became a teacher’s assistant for the infant care program at Kiddie Academy in Hillsborough and became known as Grandma Alexis to a wide range of children, many of them and their parents remaining in contact long after their time at Kiddie Academy. Alexandria is survived by her three daughters and two grandsons: Sonia with husband Paul Haley of Richmond, Virginia and sons, Dr. Erik Haley of Richmond, Virginia and Alexander Haley of Atlanta, Georgia; Natalie with husband Paul Mudge of Citta di Castello, Italy; and Lesia with husband Roman Kruchowy of Hillsborough, New Jersey. She will be lovingly remembered not only by her immediate family but also by her surviving sisters-in-law, Carol Gnyp and Stefania Pokora, as well as by her many nieces and nephews and their families. Alexandria is preceded in death by her parents Mykyta and Helena (nee Huntlacht), sister Millie Pochtar, brothers Mykola and Andrew, and cherished husband Teofil. A private viewing and memorial service followed by a funeral mass will be held at St. Andrew’s Ukrainian Catholic Church in Campbell Hall, New York on Tuesday, February 25. The viewing will be held in the church from 10:00 am, followed by a Divine Liturgy at 11:00 am. Immediately after the liturgy, Alexandria will be laid to rest next to her husband Teofil and her sister-in-law Mary Garbachewsky (nee Morawsky) at the Holy Spirit Ukrainian Catholic Cemetery in Campbell Hall, New York. Arrangements are under the direction of the Ketusky Funeral Home, 1310 Brooks Boulevard, Manville, NJ 08835 (908-575-8512). In lieu of flowers, the family suggests making a donation to one of the following causes that were important to Alexandria and her family: St. Andrew’s Ukrainian Catholic Church,141 Sarah Wells Trail,Campbell Hall, New York 10916 or to: Shriners Hospitals for Children, lovetotherescue.org (in memory of Alexandria Morawsky) 2900 Rocky Point Drive, Tampa, Florida 22607.

It is with deep sadness that the family of Alexandria Morawsky (nee Gnyp) announces her passing on February 21, 2020 at the age of 83. Alexandria, beloved mother, grandmother and aunt was welcomed into the arms of Our Lord after a prolonged... View Obituary & Service Information

The family of Alexandria Morawsky created this Life Tributes page to make it easy to share your memories.

It is with deep sadness that the family of Alexandria Morawsky...

Send flowers to the Morawsky family.