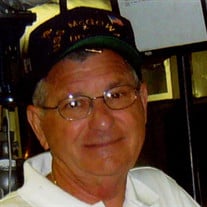 Benedict E. Pankowski, Sr. of Manville passed away peacefully at home on November 16, 2020 surrounded by his loving family following a very courageous battle with Cancer. He was 84 years old. He and his wife, Barbara, recently celebrated their 63rd wedding anniversary. Benedict Sr. was preceded in death by his beloved son Benedict Jr., his mother Mary, his father Aloysius, his brother John and his sisters Mary Regiec and Rose Stelma. Benedict was born on March 20, 1936. He attended Sacred Heart School and Dunellen High School. Benedict joined the U.S. Navy in 1953 and was Honorably discharged after serving on the U.S.S. Van der Veer and U.S.S. McGowen in 1956. In 1957, Benedict married his high school sweetheart, Barbara Helgesen, the love of his life, and settled in Manville and raised their 5 children. Benedict was an active member of the Sea Scout Leaders and a past president of Manville Fire Company #2. He was the founder of PDQ Auto Supply of Manville Inc and worked tirelessly to support his family and build his business. He was a jack-of-all trades and took pride in his many projects. Benedict was an avid New York Giants Fan and a season ticket holder for many years. He also had a love for golf and attended many PGA events. Benedict and Barbara purchased a home in Toms River where they spent many summers and weekends with their children and grandchildren boating, crabbing, BBQ-ing and listening to country music. Benedict and Barbara enjoyed traveling and went on 33 cruises together. Benedict loved to help people and was liked by all. He was a parishioner of Christ the Redeemer Parish. His family was most important in his life. Benedict is survived by his wife, Barbara, his daughters Kathryn Costello and Tracy Bauer (Dan), his sons Al (Alison) and Edward, his brother Joseph, his sister Barbara Pankowski, 8 grandchildren: Barbara (Glinka), Robert and Brad Costello, Jessica and Kelly Bauer, Edward Jr. and Natalia Pankowski and Nicole Torch as well as 13 great grandchildren: Anthony, Alex, Olivia, Makenna, Renee, Amore, Brady, Natalie, Sophia, Ralph, Rebecca, Ava and Audrey. He will be greatly missed by all of his family and friends. The family wishes to thank Atlantic Health Hospice for their excellent care, especially Georgianna for her gentleness. Visitation will be private for immediate family only. A celebration of Benedict's life will be scheduled at a later date. Arrangements are under the direction of the Ketusky Funeral Home.

Benedict E. Pankowski, Sr. of Manville passed away peacefully at home on November 16, 2020 surrounded by his loving family following a very courageous battle with Cancer. He was 84 years old. He and his wife, Barbara, recently celebrated their... View Obituary & Service Information

The family of Benedict E. Pankowski created this Life Tributes page to make it easy to share your memories.

Send flowers to the Pankowski family.