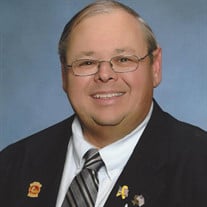 Calvin H. Wynn passed away on December 30, 2020. Born to the late Howard and Arlene (Knarr) Wynn on January 15, 1957, Calvin was a lifelong resident of Manville, until last April when he and his wife retired to Denver, NC. Calvin is survived by his wife of 39 years Jane A. (Keich) Wynn of Denver NC, his Sister Elaine (Wynn) Hand of Lower Macungie, PA, His Brother and Sister in-Law Harry and Deborah Keich of Bridgewater, His Nieces and Nephews Kristen & Kevin Courtney of Bridgewater, Amy and Joseph Simko of Manville and David Keich of Rehoboth Beach Delaware, four Great Nieces and a Great Nephew. Calvin was very active through his life. He was an active Member of the North End Volunteer Fire Co. #3 where he served with honor for over the years before attaining Exempt Status. An active Bowler, Calvin and his wife Jane managed the Junior Bowling Program at Manville Lanes for many years. He joined the board of Directors of the Somerset-Hunterdon Bowling Association in May of 1984 and served as a director, President and Association Manger for over 30 years. He was also very active at the state level, joining the New Jersey State Bowling Association in the mid 1990’s and served as Director, Vice President and finally President. He was inducted into the Somerset-Hunterdon Bowling Association Hall of Fame for Meritorious Service in 1997 and into the New Jersey State Bowling Association, also for Meritorious Service in 2011. In recent years Calvin became an active competitive billard player, participating in numerous APA leagues in the local area, and twice winning the local county championship and being able to compete in the National Billiard Tournament in Las Vegas. Besides his loving family, he leaves behind numerous friends and family who will always remember his constant smile and calm fun loving personality. A Memorial Service will take place at a later date, to be announced. In lieu of flowers, donations can be made in his name to the North End Volunteer Fire Co. # 3 P.O. #3 Manville NJ 08835. Arrangements are under the direction of the Ketusky Funeral Home, 1310 Brooks Blvd., Manville, NJ.

Calvin H. Wynn passed away on December 30, 2020. Born to the late Howard and Arlene (Knarr) Wynn on January 15, 1957, Calvin was a lifelong resident of Manville, until last April when he and his wife retired to Denver, NC. Calvin is survived... View Obituary & Service Information

The family of Calvin H. Wynn created this Life Tributes page to make it easy to share your memories.

Send flowers to the Wynn family.