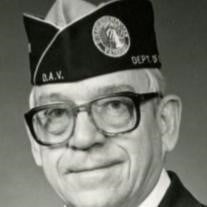 Charles F. Juliussen (Pop), 85 died Saturday March 12, 2011 at Robert Wood Johnson University Medical Center in New Brunswick, NJ. He was born in Brooklyn, NY the son of the late Charles F. and Rigmor Juliussen. He was a resident of Highland Park, NJ for the past 5 years. Prior to that he was a resident of Somerville, NJ for most of his life. Mr. Juliussen served his Country Honorably in two Branches of Military Service during two Wars. He served in the United States Navy in the Asiatic Pacific and received 3 Battle Stars in World War II and in the United States Army in the Korean War where he received 4 Campaign Stars. He served a total of 70 months overseas ( 25 months in WWII, 20 months in the Korean War, 21 months in Okinawa and 4 months in Japan). Mr. Juliussen retired as a Disabled Veteran from the Armed Forces of the United States Of America as a United States Army Specialist Second Class. He devoted much of his life to serving the Disabled Veterans of New Jersey. From 1978 to 1980 DAV Department Junior Vice Commander, 1980 to 1981 DAV Department Senior Vice Commander and 1981 to 1982 New Jersey DAV Department Commander. From November of 1987 to June of 1988 Department of New Jersey DAV Chief of Staff. In 1997 he was the New Jersey Department DAV Judge Advocate. He also served on many committees that served to assist Disabled Veterans. He was a draftsman at Ortho Diagnostic Systems Inc. in Raritan, NJ for 20 years before retiring in 1992. He was a member of the Somerville V.F.W.. He was loved and will be sadly missed. He especially enjoyed spending time with his great grandchildren. He was predeceased by his wife Doris Juliussen. He is survived by a daughter Barbara Lapotasky and her husband John of New Bern, North Carolina, his five grandchildren Tom Connell and his wife Jane, Sandy Connell and her fiance Steve Ellis, Karen Ash and her husband Allan, Barbie Bauman and her husband Damian and Michael Lapotasky and his wife Leslie. He is also survived by five great grandchildren Tom Connell, Tyler Connell, C.J. Matisak, Brandon Matisak and Dylan Bauman.The Viewing will be on Thursday March 17, 2011 from 2 to 4 and 7 to 9 PM at the Ketusky Funeral Home, 1310 Brooks Blvd., Manville, NJ. (908)575-8512. The Funeral Service will be on Friday March 18, 2011 9:30 AM at the Ketusky Funeral Home. The Commital Service will take place at Somerset Hills Memorial Park Chapel in Basking Ridge, NJ. For additional information please visit our website at www.ketusky.com.

The family of Charles F. Juliussen(Pop) created this Life Tributes page to make it easy to share your memories.

Send flowers to the Juliussen(Pop) family.