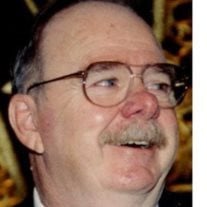 Charles F. Seiwell, 78, died Thursday April 3, 2014 at Phoebe Richland Health Care Center in Richlandtown, PA with his loving family by his side. He was born in Wilkes-Barre, PA the son of the late Charles and Sarah Seiwell. He was a resident of Manville, NJ for 27 years and has been a resident of Riegelsville, PA for the past 14 years. Mr. Seiwell worked for the Johns-Manville Corporation in Manville, NJ for 25 years and then for Rickles in South Plainfield for 20 years before retiring. He was an avid golfer, enjoyed camping and was a big fan of the New York Jets / Joe Namath. He also loved playing cards and jeopardy. Mr. Seiwell was an active member of St. Mary's Byzantine Catholic Church in Hillsborough, NJ. He was also a past president and member of the Church Holy Name Society as well as being a coach for the St. Mary's Basketball Team. He was loved by his family and friends and will be missed. He is predeceased by a sister June Seiwell Martin. He is survived by his wife of 55 years Marilyn J. Seiwell of Riegelsville, PA, his son Patrick S. Seiwell and his wife Helen of Hillsborough, NJ, his two daughters Donna Byrne and her husband Sean of Hillsborough, NJ and Catherine M. Seiwell and her boyfriend Jimmy Aguirre of Manville, NJ and a sister Ardith Seiwell Burt of Hillsborough, NJ. He is also survived by four grandchildren Michael and Kevin Byrne of Hillsborough, NJ and Patrick and Emma Seiwell of Hillsborough. The viewing will be on Monday April 7, 2014 from 4 to 8 PM at the Ketusky Funeral Home, 1310 Brooks Blvd., Manville, NJ. (908)575-8512. The Panachida will take place at 6:00 PM during the evening viewing. The Funeral will be on Tuesday April 8, 2014 9:00 AM at the Funeral Home with a 10:00 AM Funeral Service celebrated by Father Edward Cimbala. Burial will follow at Sacred Heart Cemetery. Donations may be made in his memory to: Phoebe Richland Health Care Center, 108 South Main Street, Richlandtown, PA., 18955.

Charles F. Seiwell, 78, died Thursday April 3, 2014 at Phoebe Richland Health Care Center in Richlandtown, PA with his loving family by his side. He was born in Wilkes-Barre, PA the son of the late Charles and Sarah Seiwell. He was a resident... View Obituary & Service Information

The family of Charles F. Seiwell created this Life Tributes page to make it easy to share your memories.

Send flowers to the Seiwell family.