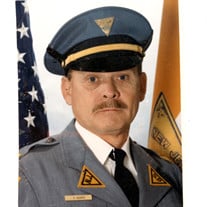 Charles J. Szukis, 79 passed away on Monday, October 1, 2018 at Robert Wood Johnson University Medical Center In Somerville, NJ with his loving family by his side. He was born in Somerville, NJ the son of the late John and Yolanda Szukis. Mr. Szukis was a lifelong resident of Manville, NJ. He served his Country Honorably in the United States Army National Guard. Mr. Szukis protected and served the citizens of the State of New Jersey during his 34 year career obtaining the rank of Lieutenant with the New Jersey State Police. He was proud to be a New Jersey State Trooper and was very dedicated to his work. Mr. Szukis was a devoted and loving husband, father, brother, grandfather and uncle. He was a member of the Retired New Jersey State Police Association and the Manville Senior Citizens Organization. Mr Szukis was an avid fisherman and enjoyed gardening. He was very proud of his home and enjoyed working on his lawn and landscaping. Mr Szukis was a member of Sacred Heart Roman Catholic Church (Christ the Redeemer Parish) in Manville, NJ. He was predeceased by his wife Veronica Szukis in 2004. He is survived by his son Charles F. Szukis and his wife Vivian of Manville, NJ, by his sister Goldie Abruzzesi and her husband Michael of Media, Pennsylvania, by his three brothers Robert Szukis of Charlotte, North Carolina, Donald Szukis of Raleigh, North Carolina and John Szukis of Hillsborough, NJ. He is also survived by his granddaughter Holly Szukis and by several nieces and nephews. The viewing will be on Thursday, October 4, 2018 from 2 to 4 and 7 to 9 PM at the Ketusky Funeral Home, 1310 Brooks Blvd., Manville, NJ. The Funeral will be on Friday, October 5, 2018 8:00 AM from the Ketusky Funeral Home followed by a 9:00 AM Mass at Sacred Heart Roman Catholic Church in Manville, NJ. Burial will follow at Sacred Heart Cemetery in Hillsborough, NJ.

Charles J. Szukis, 79 passed away on Monday, October 1, 2018 at Robert Wood Johnson University Medical Center In Somerville, NJ with his loving family by his side. He was born in Somerville, NJ the son of the late John and Yolanda Szukis. Mr.... View Obituary & Service Information

The family of Charles J. Szukis created this Life Tributes page to make it easy to share your memories.

Send flowers to the Szukis family.