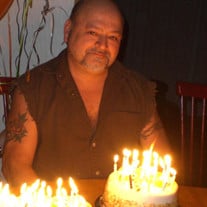 Daniel Bauer III of Manville entered eternal life on December 15, 2020. He was 65 years old. He and his wife, Tracy, recently celebrated their 35th wedding anniversary. Daniel III was preceded in death by his mother Doris, his father Daniel C., and his sister Danise Page. Daniel was born on October 27, 1955 in New Brunswick, NJ. He attended Van Derveer Elementary School and Somerset County Vocational Technical High School. In 1985, Daniel married Tracy Pankowski, the love of his life, and they settled in Manville. He was the owner of Gifford Auto Body and worked tirelessly the past 42 years to support his family and build his business. Daniel was an expert with fiberglass work, known for his Corvette knowledge, and could fabricate and fix anything. Daniel was an avid outdoorsman who enjoyed boating, fishing, shooting sports, and riding ATVs, especially with his beloved grandchildren. He loved sitting at the marina to watch the boats come in and go out to fish. He was a Home Depot shopaholic. He loved spending summer vacations on the Wildwood beach and boardwalk with his family. He loved the ocean, napping in the sun, and big family dinners. He loved to cook and made the best stew and ribs. Daniel spent lots of time riding his Harley-Davidson Fat Boy. His first passion was rebuilding and working on Corvettes, and he built his business on the premise, "Not Just Vettes." Daniel loved to help people and was liked by all. His family was most important in his life. Anyone who knew Daniel knew that he was the most loving and giving father and the silliest grandpa a family could ask for. He was a hopeless romantic. He never missed a Valentine's Day or wedding anniversary and always ordered his wife the shrimp cocktail that she loved. Daniel is survived by his wife, Tracy, his daughters Dawn Larosa, Jessica Bauer, and Kelly Bauer, his sisters Jackie Campanello and Darlene Mitchell, his brothers Wayde and Kurt, 8 grandchildren: Alexander, Anthony, Makenna, Nicholas, Amore, Sophia, Ralph, and Ava, and many nieces and nephews. He will be greatly missed by all of his family and friends. A celebration of Daniel's life will be scheduled at a later date. Arrangements are under the direction of the Ketusky Funeral Home. In lieu of flowers, please check in on his girls. They miss him so much and want to hear your memories of their father.

Daniel Bauer III of Manville entered eternal life on December 15, 2020. He was 65 years old. He and his wife, Tracy, recently celebrated their 35th wedding anniversary. Daniel III was preceded in death by his mother Doris, his father Daniel... View Obituary & Service Information

The family of Daniel Bauer III created this Life Tributes page to make it easy to share your memories.

Send flowers to the Bauer family.