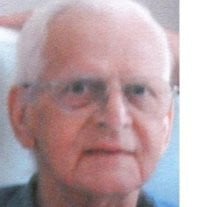 Edward J. Fobes, 82, passed away on Wednesday November 20, 2013, after a heroic battle with cancer, at Foothill Acres Rehabilitation and Nursing Center in Hillsborough, NJ. He was born in Dyberry Township, Pennsylvania the son of the late John and Anna Fobes. Edward grew up in Waymart, Pennsylvania and was a graduate of Waymart High School. He was a resident of Manville, NJ for the past 52 years. Edward served his country Honorably as a Sergeant in the United States Army during the Korean War. He was awarded the Korean Service Medal with 4 Bronze Service Stars, the United Nations Service Medal and the National Defense Service Medal. He worked as an electrician for Westinghouse, Johnson and Johnson and RCA Corporations. Edward was also a TV repairman for the Hillsborough TV Shop. Edward was a talented electrician and wired many inventions and automated pieces of equipment. He was a member of the Thomas J. Kavanaugh V.F.W. Post #2290 in Manville, NJ. Edward was a communicant of Christ The King Roman Catholic Church in Manville, NJ. He was predeceased by a daughter baby Susan and by a sister Sophie Chisek. He is survived by his wife of 55 years Nancy Fobes of Manville, NJ; his two daughters, Teri Cosentino and her husband Thomas of Brookside, NJ; and Sue Fiduk and her husband Edward of Hillsborough, NJ; his two sons, Thomas Edward Fobes and his wife Colleen of Sebastian, Florida; and Daniel Fobes and his wife Tracy of Yardley, PA.; his sister, Betty Tolerico and her husband Joseph of Newton, NJ; and his brothers, John Fobes and his wife Helen of Waymart, PA.; Joseph Fobes of Waymart. PA.; and Steven Fobes and his wife Jeannie of Newport Beach, California. He was adored by his nine grandchildren: Jenna, Tommy, Ann Marie, Emily, Gregory, Jason, Brianna, Mathew and Samantha. The viewing will be on Sunday November 24, 2013 from 2 to 4 and 7 to 9 PM at the Ketusky Funeral Home, 1310 Brooks Blvd., Manville, NJ. (908)575-8512. The Funeral will be on Monday November 25, 2013 8:15 AM from the Ketusky Funeral Home followed by a 9:00 AM Mass at Christ The King Roman Catholic Church in Manville,NJ. On Monday November 25, 2013 a viewing will then take place at The Arthur A. Bryant Funeral Home, 1228 North Main Street, Honesdale, PA from 3 to 7 PM. Prayers will be said on Tuesday November 26, 2013 at 10:00 AM at The Arthur A. Bryant Funeral Home. Burial will follow at Keen Cemetery in Waymart, PA. In lieu of flowers donations, may be made in his memory to: Steeplechase Cancer Center, 30 Rehill Ave. Somerville, NJ 08876 or to any other cancer charity. For additional information please visit our website at www.ketusky.com.

Edward J. Fobes, 82, passed away on Wednesday November 20, 2013, after a heroic battle with cancer, at Foothill Acres Rehabilitation and Nursing Center in Hillsborough, NJ. He was born in Dyberry Township, Pennsylvania the son of the late John... View Obituary & Service Information

The family of Edward J. Fobes created this Life Tributes page to make it easy to share your memories.

Send flowers to the Fobes family.