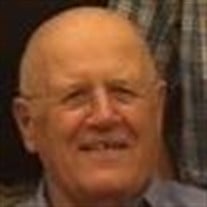 Eugene "Putson" Lazicky, 84 passed away peacefully on Wednesday, February 7, 2018 at Atlantic Hospice in Morristown, NJ with his loving family by his side. He was born in Somerville, NJ the son of the late Chester and Jennie Lazicky. Mr. Lazicky was a lifelong resident of East Millstone, NJ. He served his Country Honorably as a Sergeant in the United States Army National Guard in the 112th Artillery during the Korean War. Mr. Lazicky owned and operated Chester's Market in East Millstone, NJ from 1973 to 2008. He was known by his many customers and friends as "Putson". After selling Chester's Market he worked for Somerset County as a Golf Course Starter as he was an avid Golfer through out his life. Mr. Lazicky was a dedicated and lifetime member of the Millstone Valley Fire Department where he served as both a Fireman and Trustee for many years. He was also the Coach of the Millstone Valley Fire Department softball team for 60 years. Mr. Lazicky was also a longtime President of the Somerset County Bowling Association. He was a devoted and loving husband, father, brother and grandfather who loved spending time with his family and especially his grandchildren. Mr. Lazicky was loved by his family and friends and will be sadly missed. He was a member of St. Joseph's Roman Catholic Church in Millstone Borough, Hillsborough, NJ. He is predeceased by his two brothers Chester Lazicki, Jr. and Richard Lazicky. He is survived by his wife of 59 years Jean L. Lazicky of East Millstone, NJ, his two sons Gregory Lazicky and his wife Barbara of Basking Ridge, NJ and Dennis Lazicky and his wife Kelly of Bethlehem, Pennsylvania and by his daughter Laurie Mechler and her husband Robert of Somerset, NJ. He is also survived by his six cherished grandchildren Amanda Lazicky, Ross Lazicky, Matthew Lazicky, Kaitlyn Lazicky, Andrew Mechler and Jenna Mechler and also by his beloved grandpets. The viewing will be on Monday, February 12, 2018 from 2 to 4 PM and 7 to 9 PM at the Ketusky Funeral Home, 1310 Brooks Blvd., Manville, NJ. The Funeral will be on Tuesday, February 13, 2018 8:30 AM from the Ketusky Funeral Home followed by a 10:00 AM Mass at St. Joseph's Roman Catholic Church in Millstone Borough, Hillsborough, NJ. Burial will follow at Cedar Hill Cemetery in East Millstone, NJ. Donations may be made in his memory to: Atlantic Hospice and Homecare, 465 South Street, Morristown, NJ 07960 or to: Millstone Valley Fire Department, P. O. Box 2201, East Millstone, NJ 08875 or to: Franklin Township Animal Shelter, 475 Demott Lane, Somerset, NJ 08873. For additional information please visit our website at www.ketusky.com.

Eugene "Putson" Lazicky, 84 passed away peacefully on Wednesday, February 7, 2018 at Atlantic Hospice in Morristown, NJ with his loving family by his side. He was born in Somerville, NJ the son of the late Chester and Jennie Lazicky. Mr. Lazicky... View Obituary & Service Information

The family of Eugene "Putson" Lazicky created this Life Tributes page to make it easy to share your memories.

Send flowers to the Lazicky family.