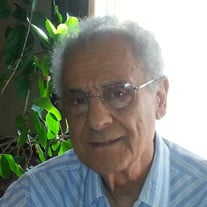 James F. Trilone, 86, entered into eternal life peacefully on Friday, February 17, 2017 at St. Peter's University Hospital, New Brunswick, NJ surrounded by his loving family. Son of the late Louis and Mary Trilone, he was born and raised in Manville, NJ. James attended Bound Brook High School and Somerset County Vocational and Technical School. James served his Country in the Marines from September 1950 to March 1952 in the Korean War. He was Honorably discharged as a Sergeant, receiving the Distinguished Service Medal. James was a life member of the Thomas J. Kavanaugh V.F.W. Post #2290 in Manville, NJ. He was also a life member of the John Basilone Detachment and the Marine Corps League. James married Dorothy Sweltz also of Manville in 1962. James retired from the State of New Jersey Youth Reception and Correction Center in Yardville, NJ as Engineer 1 in charge of maintenance in 1991. James enjoyed bowling, golf, ballroom dancing and traveling with his wife. He also belonged to the Tri-County Seniors and the Warrenbrook Seniors in the past. James lived life to the fullest on his own terms. He was a loving Husband, Father and PopPop. He was a kind man and would help anyone in need. He put others first before himself, especially his family. James will be deeply missed by everyone he touched. Besides his parents, James was predeceased by his brothers, Louis, Anthony, Nicholas and Peter Trilone. Sisters Nettie Leone, Fannie Abood, Lena Terzino and Sister Fulgenette of the Bernadine Sisters and Rose Lehnert. James leaves behind his devoted wife of 54 years Dorothy, his loving daughters Lisa Trilone-Fabian and her husband Paul, Linda Kornacivich and her husband Mark and Gina West and her husband Scott and his grandson Hunter Kornacivich in which was his pride and joy. His sister Ellen Bartok of Manville, NJ and his brother William Trilone of Pensacola, FL and by many nieces and nephews. Semper Fi Dad. The viewing will be on Wednesday February 22, 2017 from 4 to 9 PM at the Ketusky Funeral Home, 1310 Brooks Blvd., Manville, NJ. The Funeral will be on Thursday February 23, 2017 8:00 AM from the Ketusky Funeral Home followed by a 9:00 AM Mass at Sacred Heart Roman Catholic Church (Christ the Redeemer) Parish in Manville, NJ. Burial will follow at Sacred Heart Cemetery in Hillsborough, NJ. In lieu of flowers donations may be made in his memory to: St. Jude Children's Research Hospital, 501 St. Jude Place, Memphis, TN 38105 or www.stjude.org or the charity of your choice.

The family of James F. Trilone created this Life Tributes page to make it easy to share your memories.

Send flowers to the Trilone family.