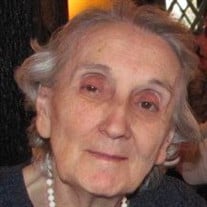 Jeannette (Prosper) Vecchio, 89, of Manville passed away on December 25, 2017, at Robert Wood Johnson Hospital at Somerset. Jeannette was born in West Mahanoy Township, PA, to Anthony and Anna (Pasavage) Prosper, the first of six children. She grew up in the coal mining region, including Lost Creek #2, Weston Place, and Shenandoah Heights. She moved to Chester, PA during World War II, graduating in 1945. After working in several stores and companies in Chester, she moved to Bound Brook, NJ, in the early 1950s, and she found work at the Art Color Company, She met her husband, Salvatore, at a dance in Hightstown, NJ, fell in love and married. Their love produced two adorable daughters, Nina and Grace. They moved to Manville in 1963. From 1969 to 1983, she worked for several book distributing companies, retiring from Baker & Taylor.One of her talents lay in sewing and crocheting. During her daughters’ school years, she sewed many outfits and crocheted quite a few blankets that still adorn her home. She enjoyed cooking and baking, as every Saturday the smells of homemade spaghetti sauce simmering on the stove would permeate her home. Lasagna was always a holiday tradition. She cooked and canned many vegetables from the garden her husband grew. Reading books, especially those on the best –seller lists, was another passion, an example that was spread to both her daughters. Homemaking and raising her family was a priority, as was helping her daughters participate in numerous activities, including tap, ballet, and jazz dance lessons, Girl Scouts, American Legion Juniors, and 4-H cooking, sewing, and twirling clubs. Jeannette was a member of the American Legion, the Manville Seniors and Sixty Plus CTK Social, and the library crochet club. She was a member of Christ the King Roman Catholic Church (Christ the Redeemer Parish) in Manville, NJ. She was predeceased by her husband, Salvatore Vecchio, in 2001, and by her mother and father; brothers Anthony Prosper, Ronald Prosper, Albert and wife Gladys Prosper; and brothers-in-law Joseph Armstrong and David Haigh.She is survived by her two daughters: Grace (and husband Patrick), and Nina. She is also survived by her sisters Margaret Armstrong and Christine Haigh. She'll be missed by many nieces and nephews. The viewing will be on Friday, December 29, 2017 from 5 to 8 PM at the Ketusky Funeral Home, 1310 Brooks Blvd., Manville, NJ. The Funeral will be on Saturday, December 30, 2017 8:30 AM from the Ketusky Funeral Home followed by a 10:00 AM Mass at St. Joseph's Church in Millstone Borough, Hillsborough, NJ. Burial will follow at Sacred Heart Cemetery in Hillsborough, NJ. For additional information please visit our website at www.ketusky.com.

Jeannette (Prosper) Vecchio, 89, of Manville passed away on December 25, 2017, at Robert Wood Johnson Hospital at Somerset. Jeannette was born in West Mahanoy Township, PA, to Anthony and Anna (Pasavage) Prosper, the first of six children. She... View Obituary & Service Information

The family of Jeannette Vecchio created this Life Tributes page to make it easy to share your memories.

Jeannette (Prosper) Vecchio, 89, of Manville passed away on December...

Send flowers to the Vecchio family.