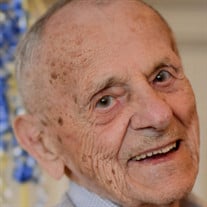 John Butrymowicz, 90, passed away peacefully on Friday, April 21, 2017 at Robert Wood Johnson Hospital at Somerset in Somerville, NJ with his loving family by his side. He was born in Shenandoah, PA; the son of the late Peter and Mary Butrymowicz. John was a resident of Manville, NJ since 1951. He served his country honorably in the United States Navy during WWII. John worked at Mack Trucks in Bridgewater, NJ for 34 years before retiring. John was blessed to live to 90 years old. First and foremost, he loved his family. He told his daughters often that the best thing that he ever did was to marry their mother. John and his wife gave their girls great guidance on how to become successful women. He enjoyed many family vacations and gatherings. John loved baseball, the Phillies and the Yankees were his favorites. He loved thoroughbred horse racing, especially Father's Day at Monmouth Park and watching the Kentucky Derby. Wherever your destination, John knew how to get you there. He was thoughtful, generous and kind and will be greatly missed. John was a member of Christ the King Roman Catholic Church (Christ the Redeemer Parish) in Manville, NJ. He was predeceased by his wife Margaret Butrymowicz in 2014 and by five brothers and four sisters. He is survived by his five daughters Terry Leyland of Somerset, NJ, Barbara Levant of Chicago, Il, Donna Groben and her husband Scott of Hamilton, NJ, Margie Baumgartner and her husband Jim of High Bridge, NJ and Jackie Marchisin and her husband Ron of Tobyhanna, PA. He is also survived by seven grandchildren, four great-grandchildren and by many nieces and nephews. The viewing will be on Tuesday, April 25, 2017 from 7 to 9 PM at the Ketusky Funeral Home, 1310 Brooks Blvd., Manville, NJ. The funeral will be on Wednesday, April 26, 2017 at 8:00 AM from the Ketusky Funeral Home followed by a 9:00 AM Mass at Christ the King Roman Catholic Church in Manville, NJ. Burial will follow at Neshanic Cemetery in Hillsborough, NJ. For additional information please visit our website at www.ketusky.com.

John Butrymowicz, 90, passed away peacefully on Friday, April 21, 2017 at Robert Wood Johnson Hospital at Somerset in Somerville, NJ with his loving family by his side. He was born in Shenandoah, PA; the son of the late Peter and Mary Butrymowicz.... View Obituary & Service Information

The family of John Butrymowicz created this Life Tributes page to make it easy to share your memories.

Send flowers to the Butrymowicz family.