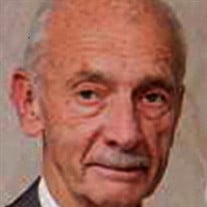 John Francis Krasnansky,Jr., 83, passed away peacefully on Monday, October 14, 2019 at Robert Wood Johnson University Medical Center in New Brunswick, NJ with his loving family by his side. He was born in Manville, NJ the son of the late Frances and John Francis Krasnansky, Sr. Mr. Krasnansky was a lifelong resident of Manville, NJ. He was a second generation owner of John Kay Electric in Manville, NJ where they had an appliance store and provided electrical contracting services. Mr. Krasnansky was a licensed Master Electrician and a well experienced craftsman. He was a loving husband, father, brother, grandfather and great-grandfather who loved spending time with his family. Mr. Krasnansky was a committee chairman for the Manville Boy Scouts Troup #286 and started the Somerville Soap Box Derby in Somerville, NJ over 20 years ago. He was a longtime member of the Somerset County Historical Society and was the Curator of the Van Veghten House Museum in Bridgewater, NJ. Mr. Krasnansky was a true Historian as well as a collector of Revolutionary War, Native American, Civil War and World War II artifacts. He also collected antique tools. Mr. Krasnansky was a member of Sacred Heart Roman Catholic Church (Christ the Redeemer Parish) in Manville, NJ. He was predeceased by his brother Robert Krasnansky and by a sister Regina Forgash. He is survived by his wife of 60 years Joanne L. Krasnansky of Manville, NJ, his son John F. Krasnansky III and his wife Faith of Hillsborough, NJ, his three daughters Jane Biago and her husband Ron of Manville, NJ, Joanne Bobal and her husband Dave of Montgomery, NJ, Genevieve Frances Lichtscheidl and her husband Steven of Manville, NJ and his two sisters Frances Brunn of Manville, NJ and Dorothy Heyman and her husband Alan of Florida. He is also survived by his eight grandchildren Kelley Kappus, Erik Biago, Tyler Bobal, Jacob Bobal, John Zack Krasnansky, Victoria Rose Bobal, Derek Krasanasky and Camryn Krasnansky and by a great-granddaughter Josephine Ann Kappus. The viewing will be on Friday, October 18, 2019 from 4 to 7 PM at the Ketusky Funeral Home, 1310 Brooks Blvd., Manville, NJ. The Funeral will be on Saturday, October 19, 2019 8:00 AM from the Ketusky Funeral Home followed by a 9:00 AM Mass at Sacred Heart Roman Catholic Church in Manville, NJ. Burial will follow at Sacred Heart Cemetery in Hillsborough, NJ. Donations may be made in his memory to: Somerset County Historical Society, c/o Marian Meyer, 9 Van Veghten Drive, Bridgewater, NJ 08807.

John Francis Krasnansky,Jr., 83, passed away peacefully on Monday, October 14, 2019 at Robert Wood Johnson University Medical Center in New Brunswick, NJ with his loving family by his side. He was born in Manville, NJ the son of the late Frances... View Obituary & Service Information

The family of John Francis Krasnansky Jr. created this Life Tributes page to make it easy to share your memories.

Send flowers to the Krasnansky family.