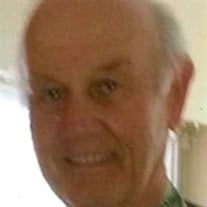 John R Mehalick John “ Babe “ Mehalick transitioned into eternal life in the comfort of his own home surrounded by his loving family on Thursday August 15, 2019. Babe was born in Hazleton, Pa to John and Anna Mehalick on April 11, 1933. He was a local football star for West Hazleton high school and played collegiate football for the Citadel. John was the devoted husband for 64 years to the love of his life, Patricia, and loving father to his four children, Patricia, Joseph, John and David. He was the caring grandfather to his twelve grandchildren, Jason, Ashley, Danielle, Nicole, Jessica, Trinity, AJ, Olivia, David, Stella, Maria and Grace and to his three great grandchildren, Sophia, Ben and Michael. Babe was a master builder by trade and built over 300 homes locally. His homes shaped the neighborhoods and growth of Manville and Raritan. John was a avid golfer and loved playing with his many golf buddies at Spooky Brook and Green Knoll golf courses. Babe was a kind, caring man and a loyal friend. His quick wit and compassionate attitude endeared him to his many life long friends. He is survived by his wife, children, grandchildren and great grand children along with his brother, Joseph, and his wife Marian, and their daughter Jane and her fiancé Corey along with Jane’s children. John is also survived by his many friends notably Luke and Tina Riga and their sons and James Dilello. Babe is also survived by his furry companion Sam. The visitation will be on Friday, August 23, 2019 from 2 to 4 and 7 to 9 PM at the Ketusky Funeral Home, 1310 Brooks Blvd., Manville, NJ. The Funeral will be on Saturday, August 24, 2019 8:00 AM from the Ketusky Funeral Home followed by a 9:00 AM Mass at Sacred Heart Roman Catholic Church in Manville, NJ. Entombment will follow at St. Bernard Mausoleum in Bridgewater, NJ. In lieu of flowers the family requests donations be made to the UPMC Hillman Cancer Center in John’s name. Donations are made by phone at 412-623-4700.

John R Mehalick John &#8220; Babe &#8220; Mehalick transitioned into eternal life in the comfort of his own home surrounded by his loving family on Thursday August 15, 2019. Babe was born in Hazleton, Pa to John and Anna Mehalick on April 11,... View Obituary & Service Information

The family of John R. Mehalick created this Life Tributes page to make it easy to share your memories.

Send flowers to the Mehalick family.