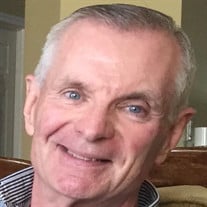 TRACY, John Patrick, 69, of Hillsborough – John Patrick Tracy of Hillsborough passed away on October 24, 2019 after a brave battle with Alzheimer’s disease. John was the son of the late John Vincent Tracy and Margaret (Clarkin) Tracy of Linden, New Jersey. After losing his father at a young age, John became more than just a brother to his four siblings, Barbara, Patricia, Bernard and Deborah. John married the love of his life, Susan (Sweeney) Tracy in 1972. They had four children, Jennifer, Jill, Jaime and John, who were John’s greatest pride and joy. John was a devoted family man who always put others before himself. He was kind to everyone he met and always had a funny story or joke to make others smile. He believed in hard work, but never took himself too seriously. John was a man of the highest integrity who led by encouragement and example. He was the first one on the dance floor and the last one to leave the party. He always had a song in his heart, but never let the lyrics get in the way. John shared his infectious laugh generously and you never doubted for one second how much he loved you. John had a distinguished twenty-five year career at Chase Manhattan Bank, retiring in 2005. He served on the Board of Education at the Bridgewater-Raritan Regional School District. He was a member of the Knights of Columbus Council No. 5959 and enjoyed coaching baseball and basketball. John is survived by his devoted wife of 47 years, Susan, his four loving children, Jennifer, Jill, Jaime and John, and his ten adoring grandchildren, Sean, Catherine, Linden, Grace, Luke, Vincent, Caleb, Larkin, Finn, Amelia, and a baby on the way. John is also survived by his sons-in-law, Stephen Zammit and Denton Jones, and daughter-in-law, Lesley Frankel. He is survived by his loving siblings, Barbara (John) Beck, Patricia (Dennis) Gerhart, Bernard (Victoria) Tracy, and Deborah (Ralf) Glebinski; and his brothers-in-law Vincent (Mary Lucille) Sweeney, Tom (Rosemarie) Sweeney, John (Colleen) Sweeney and Patrick Sweeney, plus many nieces and nephews whom he adored. John’s generous nature continues on with the donation of his brain to the Center for Neurodegenerative Disease Research at the University of Pennsylvania. We love you John, Dad, Pop, Brother, Uncle, Trace! We are the LUCKIEST! The family will receive friends on Monday, October 28 from 3:00-8:00 p.m. at Ketusky Funeral Home, 1310 Brooks Blvd., Manville, NJ. The funeral mass will be offered on Tuesday, October 29 at 10:30 a.m. at Mary Mother of God Church,157 South Triangle Rd., Hillsborough, NJ. In lieu of flowers, donations may be made online to Alzheimer’s New Jersey at alznj.org or by check to Development Department, Alzheimer’s New Jersey, 425 Eagle Rock Avenue #203, Roseland, NJ 07068.

TRACY, John Patrick, 69, of Hillsborough &#8211; John Patrick Tracy of Hillsborough passed away on October 24, 2019 after a brave battle with Alzheimer&#8217;s disease. John was the son of the late John Vincent Tracy and Margaret (Clarkin)... View Obituary & Service Information

The family of John Patrick Tracy created this Life Tributes page to make it easy to share your memories.

Send flowers to the Tracy family.