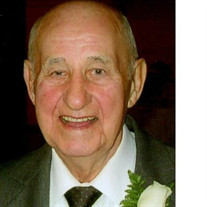 Joseph Glod, 95, passed away peacefully on Saturday December 3, 2016 at Robert Wood Johnson University Medical Center - Somerset in Somerville, NJ. He was born in McKeesport, Pennsylvania the son of the late Alber and Nellie Glod. His family then moved to Poland where he was raised and they then moved back to the United States years later. Mr. Glod was a resident of Manville, NJ for the past 36 years. He was formerly of Brooklyn, NY and Dover, NJ. Mr. Glod served his Country Honorably in the United States Army during World War II. He worked at the Cameron Machine Company in Dover, NJ as the superintendent of the machine shop for 31 years. Mr. Glod then worked at the Midland Ross Company in Franklin Township, NJ for 7 years before retiring in 1984. He was a loving husband, father and grandfather who loved spending time with his family. Mr. Glod was a member of the Manville Senior Citizens Organization. He was a member of Sacred Heart Roman Catholic Church (Christ the Redeemer Parish) in Manville, NJ. He is survived by his wife of 73 years Mary Glod, his daughter Loretta Tansey and her husband Michael of Hillsborough, NJ and by his son Chester Glod and his wife Diane of Herndon, Virginia. He is also survived by his 5 grandchildren Jennifer O'Brien, Michael Tansey, Matthew Tansey, Adam Glod and Alexander Glod. The viewing will be on Tuesday, December 6, 2016 from 2 to 4 PM at the Ketusky Funeral Home, 1310 Brooks Blvd., Manville, NJ. The Funeral will be on Wednesday, December 7, 2016 8:00 AM from the Ketusky Funeral Home followed by a 9:00 AM Mass at Sacred Heart Roman Catholic Church in Manville, NJ. Entombment will follow at St. Bernard Mausoleum in Bridgewater, NJ. For additional information please visit our website at www.ketusky.com.

Joseph Glod, 95, passed away peacefully on Saturday December 3, 2016 at Robert Wood Johnson University Medical Center - Somerset in Somerville, NJ. He was born in McKeesport, Pennsylvania the son of the late Alber and Nellie Glod. His family... View Obituary & Service Information

The family of Joseph Glod created this Life Tributes page to make it easy to share your memories.

Send flowers to the Glod family.