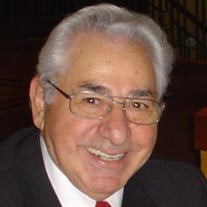 Joseph M. Greco, Sr., 89, passed away at St. Peter’s University Hospital on October 30, 2019, with his family at his bedside. Born in Raven Run, a small mining town in eastern Pennsylvania, Joe was the youngest of nine siblings. At 18 years old, he moved to New Jersey to find work. Soon after, he met Aileen D’Alesandro and they were married at 21. They settled in Bound Brook where they raised three children. Joe became a machinist at Johns Manville, and was always proud to say that he did work on the heat shield of the Apollo capsule. He took great pride in his trade. He later worked at Thul Engines, American Cyanamid, and American Hoechst / Celanese. Joe and Aileen were happily married for nearly 68 years. He was a devoted husband, father, grandfather, and great-grandfather. He loved family gatherings, small and large. He especially enjoyed vacations with his children and grandchildren in Ocean City, Maryland, where his favorite restaurant was Hooper’s Crab House. Playing cards with the grandchildren and having ice cream parties with them were some of his favorite activities. Joe had a great sense of humor and loved to keep friends and family entertained telling jokes or sending humorous emails. He enjoyed long lived friendships with alumni from Butler Township High School, YMCA swim class, many former work colleagues, and of course, all his neighbors. Joe is predeceased by his son, Joseph M. Greco, Jr. He is survived by his devoted wife, Aileen, daughter Janice Clouser and her husband Steve, son Craig Greco and his wife Donna, and daughter-in-law Janice Greco. He is also survived by his grandchildren, Mark Greco and wife Megan and their daughters Aubrey and Brynlee, Anthony Greco and wife Diana, Arianna Greco and finance Chris Grimes, Kyle Greco and wife Lauren, Alyssa Greco, Ryan Clouser and Lauren Clouser, as well as numerous nieces, nephews, and friends. A viewing will be held on Sunday, November 3,2019, from 2 to 6 pm at the Ketusky Funeral Home, 1310 Brooks Blvd., Manville, NJ. The funeral will be on Monday, November 4, 2019, 8:30 am from the Ketusky Funeral Home, followed by a 10:00 am Mass at Blessed Sacrament Church, 1890 Washington Valley Rd, Martinsville, NJ. Entombment will follow at Saint Bernard RC Cemetery, 551 NJ-28, Bridgewater Township, NJ. In lieu of flowers, donations may be made in his memory to Saint Jude Children’s Research Hospital (StJude.org).

Joseph M. Greco, Sr., 89, passed away at St. Peter&#8217;s University Hospital on October 30, 2019, with his family at his bedside. Born in Raven Run, a small mining town in eastern Pennsylvania, Joe was the youngest of nine siblings. At 18... View Obituary & Service Information

The family of Joseph M. Greco created this Life Tributes page to make it easy to share your memories.

Send flowers to the Greco family.