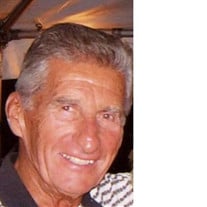 Joseph F. Palochko, 91, passed away peacefully on Monday, November 14, 2016 at JFK Medical Center in Edison, NJ with his loving family by his side. He was born in Manville, NJ the son of the late John and Elizabeth Palochko. He was a resident of Siesta Key, Florida and had lived in Bridgewater, NJ for six months of the year. Mr. Palochko was formerly of Manville, NJ and Colorado. He served his Country Honorably in the United States Navy as an aviation radioman during WWII. While serving his Country he received the Asiatic Pacific Medal, the Victory Medal and the American Theatre Medal. Mr. Palochko worked for the Johns-Manville Corporation as a researcher for over 25 years in both Manville, NJ and Colorado and was a member of the Quarter Century Club. He was a loving husband, father, grandfather and great-grandfather. Mr. Palochko loved spending time with his family and friends and most especially with his children and grandchildren. He was a man who was dedicated to his family. He also enjoyed spending time at the beach in Florida. Mr. Palochko was a life member of the Thomas J. Kavanaugh V.F.W. Post #2290 and the Manville American Legion Post #304. He was also a member of the Manville-Hillsborough Elks in Hillsborough, NJ and the Fraternal Order of Eagles in Bridgewater, NJ. Mr. Palochko was a past member of the Sacred Heart Drum and Bugle Corps. He also volunteered his time at Somerset Medical Center and to the Florida Grapefruit Baseball League.He was a member and Usher at Sacred Heart Roman Catholic Church (Christ the Redeemer Parish) in Manville, NJ. He was also a member of St. Michael the Archangel Roman Catholic Church in Siesta Key, Florida. He was predeceased by his first wife Cecilia Palochko. He is survived by his wife Teresa Byra-Palochko, his sons Joseph Palochko and his longtime significant other Dr. Kathryn Lindenseld of Bloomsburg, PA. and David Palochko of Manville, NJ, his daughters Kathy Scotti and her husband Joseph of Hillsborough, NJ and Tina Kolodzieski and her husband Matthew of Columbia, NJ, his brother John Palochko of Morrison, Colorado and his sister Helen Petras and her husband John of Centennial, Colorado, his step-sons Andrew Byra and his wife Carol of Pompton Lakes, NJ and Frank Byra and his wife Lois of Whitehouse, NJ and his step-daughters Mary Tabbit and her husband Joseph of Hillsborough, NJ and Teresa Byra-Moore and her husband Kelly of Stewartsville, NJ. He is also survived by his grandchildren Colin, Justin, Rachel, Jacqueline, Jill, Matthew, Kevin, Jeremy, Jonathan, Jennifer, Craig, Janelle, Amanda, Caylin, Drew, Jordyn, Janelle and Megan and by great-grandchildren Grace, Mack,Susie, Evan, Christain, Landon, Sage and Jackson. The viewing will be on Friday, November 18, 2016 from 2 to 4 and 7 to 9 PM at the Ketusky Funeral Home, 1310 Brooks Blvd., Manville, NJ. The Funeral will be on Saturday, November 19, 2016 8:00 AM from the Ketusky Funeral Home followed by a 9:00 AM Mass at Sacred Heart Roman Catholic Church in Manville, NJ. Entombment will be at National Cemetery in Sarasota, Florida.

Joseph F. Palochko, 91, passed away peacefully on Monday, November 14, 2016 at JFK Medical Center in Edison, NJ with his loving family by his side. He was born in Manville, NJ the son of the late John and Elizabeth Palochko. He was a resident... View Obituary & Service Information

The family of Joseph F. Palochko created this Life Tributes page to make it easy to share your memories.

Send flowers to the Palochko family.