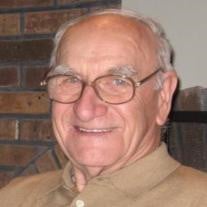 Joseph G. Polak, 87 died after a short illness on Saturday October 2, 2010 at home with his family by his side. He was born in Piney Fork, Ohio the son of the late Anthony and Anna Polak. He was a resident of Manville, NJ for over 60 years before moving to Bridgewater, NJ 9 years ago. Mr. Polak served his Country in the United States Army during World War II. He received the American Campaign Medal, the Asiatic-Pacific Campaign Medal with 1 Bronze Battle Star, the World War II Victory Medal and the Good Conduct Medal. After World War II he played semi-pro football with the Plainfield Saracens in the 1940's. He was a Milk Distributor for Raritan Valley Farms of Somerville, NJ for over 20 years. He then worked for the Chubb Insurance Company in Woodbridge, NJ as an Insurance Agent for 17 years before retiring in 1985. Mr. Polak was a life member of the Thomas J. Kavanaugh V.F.W. Post #2290 in Manville, NJ. He was honored by the V.F.W. with the "Outstanding Citizen Award" for 1983-84. He was a founding member of the MYAL ( Manville Youth Athletic League) and was one of the originators of the Pop Warner Football Program and coached from 1960 to 1985. He also started the Manville Recreation Wrestling Program. He was an avid sports fan and he enjoyed golf and bowling. He was a member of the Manville Senior Citizens Organization and then the Bridgewater Senior Citizens Club. Mr. Polak was a member of Sacred Heart Roman Catholic Church in Manville, NJ. He was loved by his family and friends and will be sadly missed. He was predeceased by his sisters Mary Pitek, Kathleen Tobias and Caroline Golden, by a brother Leonard Polak and by a granddaughter Aimee Polak. He is survived by his wife of 66 years Mary L. Polak of Bridgewater, NJ, his sons Joseph Polak Jr. and his wife Elaine of Skillman, NJ, James Polak and his partner Bill Harris of Atlanta, Georgia, his daughter Ellie Kresefsky of Hillsborough, NJ and a brother Michael Polak of Manville, NJ. He is also survived by four grandchildren Timothy Polak, Joelle Reinson, Brian Kresefsky and Jennifer Kresefsky and by three great-grandchildren Aidan and Logan Reinson and Katie Polak. The viewing will be on Tuesday October 5, 2010 from 5 to 8 PM at the Ketusky Funeral Home, 1310 Brooks Blvd., Manville, NJ. (908)575-8512. The Funeral will be on Wednesday October 6, 2010 8:15 AM from the Ketusky Funeral Home followed by a 9:00 AM Mass at Sacred Heart Roman Catholic Church in Manville, NJ. Burial will follow at Sacred Heart Cemetery in Hillsborough, NJ.

Joseph G. Polak, 87 died after a short illness on Saturday October 2, 2010 at home with his family by his side. He was born in Piney Fork, Ohio the son of the late Anthony and Anna Polak. He was a resident of Manville, NJ for over 60 years before... View Obituary & Service Information

The family of Joseph G. Polak created this Life Tributes page to make it easy to share your memories.

Send flowers to the Polak family.