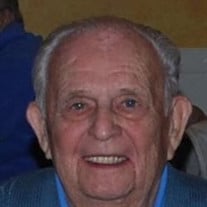 Louis G. Fischer, 83, passed away peacefully on Friday May 23, 2014 at his home in Manville, NJ with his family by his side. He was born in Bound Brook, NJ the son of the late Louis and Josephine Fischer. Mr. Fischer attended Manville Camplain Road and Main Street Schools, and graduated from Bound Brook High School in Bound Brook, NJ. He was a resident of Manville, NJ for the past 78 years. Mr. Fischer served his Country Honorably in the United States Air Force during the Korean War from 1950 to 1953. He served at the Davis Monthan Air Force Base in Tucson, Arizona as part of the 303rd Supply Squadron. Mr. Fischer worked at the Johns-Manville Corporation in Manville, NJ for 38 years. He then worked for B&L Printing Co. also in Manville, NJ. Mr. Fischer was an Awarded Polka Dancer in his youth. He was an avid bowler for over 50 years and won a National Senior Bowling Tournament in Toledo, Ohio in 1991. Mr. Fischer was inducted into the Somerset-Hunterdon County Bowling Hall of Fame in 1993. He was one of the founders of the Am-Can Fisherman Sports Club and a member for over 30 years. He enjoyed fishing Canada, Virginia and New Jersey. During the early 1960's he was a co-owner of the Manville Sports Shop in Manville, NJ. He was also a member of the Thomas J. Kavanaugh V.F.W. Post #2290 and the American Legion Post #304 both in Manville, NJ. In the 2000's he served as the Commander of the American Legion. He was also a member of the Johns-Manville Quarter Century Club. Mr. Fischer loved to travel the Country by car and spent countless hours with his grandchildren, and great grandchild. He was a member of Sacred Heart Roman Catholic Church in Manville, NJ. He is predeceased by his brother Raymond Fischer. He is survived by his wife of 58 years Emma Fischer of Manville, NJ, his two daughters Susan Walters and her husband Richard of Hillsborough, NJ and Jeanne Bartolome and her husband Mike of Manville, NJ, his two sons Lou Fischer and his wife Sharon of Manville, NJ and David Fischer and his wife Angela of Orange, California. He is also survived by his grandchildren Rich Walters and his wife Diane, Kelly Bartolome, Kevin Bartolome, Alison Fischer, Holly Fischer, Jamie Fischer and Noelle Fischer and his great-granddaughter Emma Walters. The viewing will be on Wednesday May 28, 2014 from 5 to 8 PM at the Ketusky Funeral Home, 1310 Brooks Blvd., Manville, NJ. (908)575-8512. Burial will be private. For additional information please visit our website at www.ketusky.com.

Louis G. Fischer, 83, passed away peacefully on Friday May 23, 2014 at his home in Manville, NJ with his family by his side. He was born in Bound Brook, NJ the son of the late Louis and Josephine Fischer. Mr. Fischer attended Manville Camplain... View Obituary & Service Information

The family of Louis G. Fischer created this Life Tributes page to make it easy to share your memories.

Send flowers to the Fischer family.