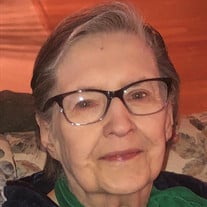 Marion Mitchell, 88, of Somerset, New Jersey passed away peacefully on Monday, October 18, 2021. She was born on April 16, 1933 in Wilkes Barre, Pennsylvania to the late Margaret and Adam Monto and was one of 11 children. Marion was raised in Wilkes Barre and was a graduate of G.A.R. High School. After marriage, she later moved to New Jersey, eventually settling in Manville where she raised her family and lived for many years. Marion worked at Baker and Taylor in Bridgewater, New Jersey, as a data entry operator until her retirement. For years Marion, along with her late husband Frank, loved hosting and entertaining family and friends at their vacation home in the Pocono Mountains in Pennsylvania. Each year brought another Super Bowl party or summer barbecue. Marion also loved animals, collecting angels, and doing crossword puzzles. Most of all, “Grammy Mar” cherished spending time with her family and especially her four grandchildren. In the best of times that even included several trips to the Caribbean. Those who knew her appreciated her gentle and caring personality, her generosity, and her clever sense of humor. Marion was a devoted Catholic and long time parishioner of Christ the Redeemer Church in Manville, New Jersey. Along with her parents she is predeceased by her husband, Frank Mitchell, brothers Vito, Leonard, George, and Lt. Col. (Ret.) Olgert Monto, sisters Aldona Monto, Helen Monto, Ruth Purdy, Ann Norosky, Caroline Hughes, and Delores Dourand. Marion will be greatly missed by her daughter, Eileen Mitchell Sepesi and her husband Michael of New York, NY and her son, Frank Mitchell and his wife Janet of Morristown, NJ. Also missing “Grammy Mar” will be her four grandchildren, Michael and Veronica Sepesi and Frank and Jennifer Mitchell. Friends and relatives are invited to attend a Memorial Visitation for Marion on Sunday, October 24, 2021 from 4:00 PM to 7:00 PM to be held at Ketusky Funeral Home, 1310 Brooks Blvd., Manville, NJ 08835. The Funeral will be held on Monday, October 25, 2021, 8:00 AM at Ketusky Funeral Home followed by a 9:00 AM mass at Sacred Heart Roman Catholic Church (Christ the Redeemer Parish) in Manville, NJ with burial to follow at Sacred Heart Cemetery in Hillsborough, NJ. Donations can be made in Marion’s memory to St. Jude’s Children’s Research Hospital, at Stjude.org.

Marion Mitchell, 88, of Somerset, New Jersey passed away peacefully on Monday, October 18, 2021. She was born on April 16, 1933 in Wilkes Barre, Pennsylvania to the late Margaret and Adam Monto and was one of 11 children. Marion was raised in... View Obituary & Service Information

The family of Marion Mitchell created this Life Tributes page to make it easy to share your memories.

Send flowers to the Mitchell family.