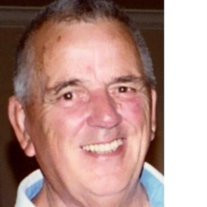 Paul W. Lonsdorf of Hillsborough, NJ and The Villages, FL, passed away on December 21, 2013 at Somerset Medical Center, surrounded by his six children, their loving and supportive spouses, and many of his 13 grandchildren. He was but one week shy of his 83rd birthday. Larger than life in many ways, "Dutch" as he was known to many, was born on December 28, 1930 in Minooka, PA, and attended the University of Scranton. He was preceded in death by his loving wife of 47 years, Nancy (Munley), his brothers Joseph (St. Ann, MO) and John (York, PA), and his sisters Catherine Silver ( Montville, NJ) and Mary Jane Forbes (West Paterson, NJ). Paul and Nancy raised 6 children and instilled in each a strong work ethic, the love of learning, the necessity of being able to defend your opinion, a sense of humor, an appreciation for music and the value of family. Despite a demanding work schedule, he always carved out time to attend his children's activities and sporting events. Paul worked his way up through the ranks of commercial banking from teller to President of two different community banks- the Village Bank of South Orange and Mountain Ridge State Bank. As a young bank manager, he once chased down and apprehended a young man who had robbed his bank, sustaining a broken hand in the process. He retired from banking in 1998. Paul moved to Hillsborough in 1967 where he lived a colorful and generous life. He was a communicant at Christ the King parish in Manville, and a member of the Somerville Knights of Columbus (where he served as Grand Knight, President of the Columbus Club and was named Knight of the year), the Somerville chapter of the Ancient Order of Hibernians, the Manville-Hillsborough Elks, and the Hillsborough Senior Citizens. He enjoyed traveling with Nancy and close friends. He was always quick with a joke, and happy to swap stories over a cold brew. Following the untimely death in 1999 of his wife, Nancy-- the true love of his life-- he courageously re-invented his life by moving to Florida for 12 years, becoming the toast of The Villages, a senior community, where he was active in numerous clubs and groups. Health issues forced his relocation back to Hillsborough last December. He is survived by his six children and their spouses, Paul and Debbie Lonsdorf of Plano, TX; John and Lyn Lonsdorf of Bridgewater, NJ; Linda and Jim Fredericks of Hillsborough, NJ; Jim and Sue Lonsdorf of Reading, PA; Rich and Wendy Lonsdorf of Cranbury, NJ; and Kevin and Paula Lonsdorf of Bound Brook, NJ. In addition, he is survived by his 13 grandchildren, Brian and his wife Mimi and daughters Dinah and Vera, Tracy and her husband Captain Dan Weathers, Jimmy, Kristen, David, Leann, Patrick, Tori, Aime, Katie, Kevin, Mikey and Tara, as well as his long-time companion Susan Duell of The Villages, FL. Arrangements are through Ketusky Funeral Home, 1310 Brooks, Blvd., Manville, NJ. (908)575-8512. A visitation is scheduled for Friday, December 27, 2013 from 2 to 4 and 7 to 9 PM at the Ketusky Funeral Home. The Funeral will take place on Saturday, December 28, 2013 8:15 AM from the Ketusky Funeral Home followed by a Catholic funeral mass at Christ the King Church in Manville, NJ at 9:00 AM. Paul will be buried next to his loving Nancy at Neshanic Cemetery. In lieu of flowers, the family requests memorial contributions be made to the American Heart Association. For additional information please visit our website at www.ketusky.com.

Paul W. Lonsdorf of Hillsborough, NJ and The Villages, FL, passed away on December 21, 2013 at Somerset Medical Center, surrounded by his six children, their loving and supportive spouses, and many of his 13 grandchildren. He was but one week... View Obituary & Service Information

The family of Paul W. Lonsdorf created this Life Tributes page to make it easy to share your memories.

Send flowers to the Lonsdorf family.