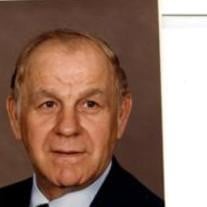 Peter George Saharko, a man of unparalleled wisdom, strength, and decency, died Sunday January 13, 2012 at home with his family by his side. Peter, 87, was born in Dunellen on July 26, 1925, and was a resident of Manville for most of his life. Raised with love by his brother Steven and sister Anna, Peter was a three sport athlete at Dunellen High School and was captain of Dunellen's state championship basketball team in 1943. Peter enlisted in the U.S. Army after high school and served with honor and distinction in the Pacific during World War II, earning a Bronze Star. Peter holds undergraduate and masters degrees from Rutgers University, which he attended on the G.I. Bill. Peter married his first wife, Olga Jean Fierst Saharko, in 1951 and in 1953 they were blessed with a daughter, Beverly. Olga Jean entered eternal life in 1972. Peter spent his entire career serving the public as an educator, with the vast majority of his time spent at Dunellen High School. He retired as director of guidance of the school in 1985. Peter also served two terms as an elected member of the Manville Board of Education. It was at Dunellen High School that Peter met Sally, his second wife, and the two were married in 1974, with Peter David born to them in 1975. Peter was a man untouched by the cynicism of our modern age and he approached all of his endeavors with the quiet strength that defined him for so many. Always guiding his path of righteousness was his steadfast commitment to prayer and spiritual life. Peter George was born with little of worldly value but fought to provide a great life for his family. His values will stay with that family forever. Although heartbroken by losing him, Peter George's family considers itself extraordinarily fortunate to have shared a lifetime with such an unassuming but unwavering guide to the righteous path. Peter is survived by his wife, his beloved Sally; his children, daughter Beverly Kloepping and her husband Frank Kloepping; son Peter David Saharko and his wife Melissa Wells Saharko; his grandchildren, Michael Kloepping, Kelly Kloepping, and Kara Kloepping; and sister in law Sister Anne McDonald. The viewing will be held on Tuesday, January 15 from 2 to 4 p.m. and 7 to 9 p.m. at the Ketusky Funeral Home, 1310 Brooks Blvd, Manville, N.J. (908) 575-8512. The funeral will be on Wednesday, January 16 at 8:45 a.m. from the Ketusky Funeral Home followed by a 10 a.m. mass at Mary Mother of God Roman Catholic Church in Hillsborough, N.J. Burial will follow at Sacred Heart Cemetery in Hillsborough, N.J. For additional information please visit our website at www.ketusky.com

Peter George Saharko, a man of unparalleled wisdom, strength, and decency, died Sunday January 13, 2012 at home with his family by his side. Peter, 87, was born in Dunellen on July 26, 1925, and was a resident of Manville for most of his life. Raised... View Obituary & Service Information

The family of Peter G. Saharko created this Life Tributes page to make it easy to share your memories.

Send flowers to the Saharko family.