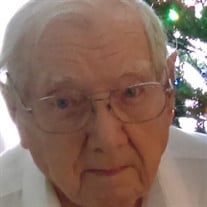 Raymond Zolandz Sr., of Manville, passed away peacefully on January 1, 2021 at the age of 95. Raymond was born in Bound Brook and grew up there during the Great Depression. He joined the Army in 1943 and was a veteran of World War II, serving honorably in the European Theater as a radio operator in an artillery forward observation group of the 42nd Infantry (“Rainbow”) Division. Among his medals and citations were the Bronze Star and the Distinguished Service medal. His career was spent as a draftsman, briefly for Johns-Manville Corp and then for many years at Bowen Engineering. In his retirement years, Raymond enjoyed attending reunions of his army unit and periodic trips to local casinos, and was an avid mall-walker at Bridgewater Commons for many years. He was a communicant of Christ the Redeemer RC Church in Manville, where for many years he volunteered at weekly Bingo and the annual Summer Festival. Raymond was pre-deceased by his wife of 60 years, Ann, in 2013, by his parents, both immigrants from Poland, George Zolandz and Katarzyna (Fik) Zolandz, and by his daughter Valerie Zolandz in 2011. He was also pre-deceased by siblings Mary (Zolandz) Teresak, Edward Zolandz, Sister Mary Agnelle (Clara) Zolandz, Regina (Zolandz) Ptaszynski, Francis Zolandz, Thomas Zolandz, Jusef Zolandz, Eugene Zolandz, Henry Zolandz, John Zolandz, and George Zolandz. He is survived by six children; his daughters Ann Marie Zolandz of Manville, and Dorothy Zolandz and her husband Mark DeBroeck of Washington DC, his sons Raymond Zolandz Jr. and his wife Donna of Wilmington DE, Edward Zolandz and his wife Judy of Humble TX, and Thomas Zolandz and Robert Zolandz of Manville. He is also survived by five grandchildren and seven great-grandchildren. The Funeral will take place on Friday, January 8, 2021 9:00 AM at Sacred Heart Roman Catholic Church (Christ the Redeemer Parish) in Manville, NJ. Burial will follow at Sacred Heart Cemetery in Hillsborough, NJ. In lieu of flowers donations may be made in his memory to: Christ the Redeemer Parish, 98 South 2nd Ave., Manville, NJ 08835 or to the Medical Research Charity of your choice.

Raymond Zolandz Sr., of Manville, passed away peacefully on January 1, 2021 at the age of 95. Raymond was born in Bound Brook and grew up there during the Great Depression. He joined the Army in 1943 and was a veteran of World War II, serving... View Obituary & Service Information

The family of Raymond Zolandz Sr. created this Life Tributes page to make it easy to share your memories.

Raymond Zolandz Sr., of Manville, passed away peacefully on January...

Send flowers to the Zolandz family.