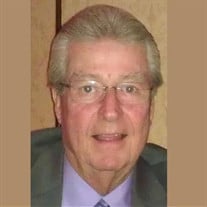 Richard Francis Mechler, age 73, passed away in Florida on December 10, 2015. Rich was born on May 1, 1942 to the late Irving and Marie Mechler (Hummel). He grew up in East Orange, NJ and attended Clifford J. Scott High School, where he met his wife of 50 years, Geraldine Ciallella Mechler. In addition to his loving wife, he is survived by his daughter Cheryl Mechler Truppi and her husband Marco, his son Robert Mechler and his wife Laura (Lazicky), and his adored grandchildren, Andrew, Jenna, Nicholas and Christian. He is also survived by his brothers Robert and his wife Judy (Levering), Ronald and his wife Laurel (Wasner), and his brother-in-law Thomas Ciallella. He also has four nephews, one niece and many friends who will miss him dearly. Rich was owner, President and Manager of Boulevard Funeral Home in New Milford, NJ where he lived with his family for 43 years. Throughout his life he was involved in numerous civic, religious and business organizations. Before moving to New Milford in 1969, he became Exalted Ruler of East Orange Lodge #630 BPOE Elks and continued his involvement in the Elks Club for many years. While in New Milford, he served as town Councilman for 11 years, was a charter member and President of the New River Dell Optimist Club and the first President of the Chamber of Commerce. As an active member of the parish of the Church of the Ascension, he was a lector, Eucharistic minister and served as President of the Parish Council 1976-77. The Chief Justice White Council #2586 Knights of Columbus also enjoyed his membership. As a funeral director, Rich took great pride in giving the best possible service to the families he served. Since 1965, he held active membership in the National Funeral Directors Association, NJ State Funeral Directors Association and the Bergen County Funeral Directors Association where he served as President 1970-71 and 1986-88. After retiring in 2012, Rich and Gerri have been enjoying life at the shore in Lavallette, NJ and at their condo in Fort Myers Beach, FL. An avid fisherman and boater, he was happiest with a fishing pole in his hands or working on his boats. His jolly laugh, infectious smile and warm personality will be with us forever. The viewing will be on Wednesday December 16, 2015 from 7 to 9 PM and on Thursday December 17, 2015 from 2 to 4 and 7 to 9 PM at the Ketusky Funeral Home, 1310 Brooks Blvd., Manville, NJ. (908)575-8512. The Funeral will be on Friday December 18, 2015 8:45 AM from the Ketusky Funeral Home followed by a 10:00 AM Mass at St. Joseph Church, 34 Yorktown Rd., Millstone Borough, Hillsborough Twp., NJ 08844. Entombment will follow at Resurrection Cemetery in Piscataway, NJ. If desired, in lieu of flowers, please consider donating to Joanne's House at Hope Hospice, 27200 Imperial Parkway, Bonita Springs, FL 34135. Donate online at www.hopehospice.org. For online condolences to the family or for additional information please visit our website at www.ketusky.com.

Richard Francis Mechler, age 73, passed away in Florida on December 10, 2015. Rich was born on May 1, 1942 to the late Irving and Marie Mechler (Hummel). He grew up in East Orange, NJ and attended Clifford J. Scott High School, where he met... View Obituary & Service Information

The family of Richard F. Mechler created this Life Tributes page to make it easy to share your memories.

Richard Francis Mechler, age 73, passed away in Florida on December...

Send flowers to the Mechler family.