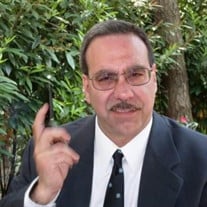 Wayne R. Tordo of Hillsborough, passed away peacefully on December 4, 2020. He was born in Brooklyn, NY, the son of Ettore and Virginia (Fornaro) Tordo. Wayne's family moved to New Jersey when he was very young. Wayne graduated from Bayley Ellard High School in Madison, NJ in 1977. He graduated from Drew University in Madison, NJ, with a bachelor's degree in Political Science in 1981. His career path took him to New York City, where he held different positions in the insurance industry handling professional liability claims and underwriting, most recently for Liberty Mutual. Wayne met the love of his life, his wife Catharine, at Drew University in 1977, and they have been friends ever since. Throughout his life, Wayne always loved playing sports and watching sports. He especially liked watching football and college basketball. His favorite though, was watching both of his children when they played soccer, basketball, and baseball. Wayne's most recent wish in life was to be a grandfather- a wish that was granted. He loved spending time with his grandchildren. Wayne was predeceased by both of his parents, his brother Glenn Tordo, and his nephew Michael Chapman. He is survived by his wife of 35 years, Catharine (Lisa) Tordo of Hillsborough, NJ, his daughter Lisa Tordo and her fiancé Doug Trumbore of Hillsborough, NJ, his son Anthony Tordo and his wife Julia and their children Jesse and Aurora of Bridgewater, NJ and his two miniature pinschers, Ruby and Diesel. He is also survived by his four sisters, Donna Bausch (Bob) of Winter Springs, FL, Lana Petrovich (Tom) of Florham Park, NJ, Gale VanWaalwijk (John) of Manahawkin, NJ, Gina Sidi (Neil) of Florham Park, NJ, eight nieces, and other extended family. At Wayne's request, there was no viewing, and his burial was private. Arrangements were under the direction of the Ketusky Funeral Home, 1310 Brooks Blvd., Manville, NJ. Wayne's wife and children request that anyone who would like to remember Wayne with a donation, please make that donation to St. Jude Children's Research Hospital.

Wayne R. Tordo of Hillsborough, passed away peacefully on December 4, 2020. He was born in Brooklyn, NY, the son of Ettore and Virginia (Fornaro) Tordo. Wayne's family moved to New Jersey when he was very young. Wayne graduated from... View Obituary & Service Information

The family of Wayne R. Tordo created this Life Tributes page to make it easy to share your memories.

Wayne R. Tordo of Hillsborough, passed away peacefully on December...

Send flowers to the Tordo family.